So much has happened in the past week or so. Due to the election coverage, we had a Bachelorette episode on Thursday and then Tuesday. I’m not going to lie, the concentration of Bach exposure was a welcomed distraction from all of the other things going on in the world.

But ultimately, we are here now to discuss all the juicy topics that happened and if you’ve been keeping up at all, you know it was indeed dramatic.

I won’t go into the minutia this recap because the meat and potatoes are that good, so here we go.

Episode 4 opens with the men discussing how obvious Clare and Dale’s relationship has become. Chris comes to talk with Clare and lets her know that it’s not going well. He identifies that the guys are indeed upset, and that Clare really is all in it with Dale. They come to the conclusion that she wants to move forward with just Dale and asks about next steps. Chris let’s her know the next step is a proposal.

Clare goes to tell the men what is happening. That she has found love with Dale and that they are leaving together. The men are obviously upset. Many feeling like that didn’t get any time to get to know her, questioning if they had previous contact, asking for an apology. I won’t leave my opinion here about whether I think Clare owed them an apology, but I can definitely understand the frustration.

Chris let’s Dale know of the next steps and we cut to the scene of Clare waiting for Dale to “show up.” I put that in quotes because despite that being what I literally meant I never want to hear the phrase show up ever again after this. Dale does indeed show up and proposes to Clare with a gorgeous ring. She gives him the final rose and they leave together. 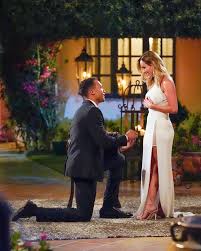 Chris comes back to tell the men that if they will consider staying, they are bringing in a new Bachelorette. We FINALLY get to acknowledge what we have known all along that Tayshia Adams is indeed our new Bachelorette and we are left on a cliffhanger seeing how the men react.

Episode 5 picks up with the men meeting Tayshia and let me tell you if you missed it you need to go back and watch. It was seriously one of those “look at the groom when the bride comes down the aisle” moment.

The men were so happy to meet her and started making introductions. Chris then comes in to tell us there is another surprise. There is another limo and we are introduced to four new men, Spencer, Peter, Montel, and Noah. The original men aren’t super jazzed by this idea but the new guys seem really excited to be here. Tayshia decides to cancel the rose ceremony and spend time getting to know the guys.

We can’t wait for this journey to begin but we are interrupted by a sit-down with Clare and Dale. At that moment, I felt the world rumble as all of Bachelor Nation let out a collective groan. They told us for the 50th time that they never had any conversations before the show. Sure. wink She just fell in love with his social media posts. They talk about what’s next for them in the most cringy conversation possible in which it is completely evident that Clare and Dale are on two different pages. However, I genuinely hope they are happy, and this works for them.

We finally pan back to Tayshia!

We finally see another group date in which they have a pool party. The men play splash ball, which is a form of pool basketball, in speedos of course. The winning team gets extra time with Tayshia. She has some great conversations with Zac C, Spencer, and Eazy and ultimately gave the group date rose to Eazy. She individually thanks them all for their time. She’s the sweetest.

After the group date we find out that Jason has been struggling emotionally with his feelings for Clare and decides to leave on his own. He and Tayshia have mature conversation about it and she lets him know this was her worst fear coming in to this process after Clare. But I definitely can appreciate him not taking up her time or someone else’s that is able to be fully invested. I don’t think this will be the last of Jason in Bachelor world.

Tayshia then chose Brendan for the-one-on-one date. They go horseback riding around La Quinta as Chris Harrison motors around the resort popping up at all places. At dinner they bonded over the fact that they have both been married before and divorced at a younger age. Tayshia said she could go home with him right now and that he is everything. They ended with a firework show with the guys watching from their huts in La Quinta.

I have to say this is the first date in a loooooooong time that we have been able to watch two people connect and I am here for it! After so many seasons of dumb drama this was so refreshing. I also left feeling like we are actually getting to know the men a lot better. Bravo producers!