The episode 2 recap took a little longer than usual due to the fact that I was recovering from the level of cringe that was exhibited this week.

Here’s the rundown of episode two.

The first group date was all about the 5 love languages. In all honesty as a personal fan of the concept of love languages, the notion of this date was really nice. Watching it come to fruition was something else. We watched the men shower Clare with words of affirmation, run their sockless feet back to their rooms to find a gift for her, and then let Clare practice physical touch.

Once the evening started we experienced the longest awkward pause when it was time for the men to take time with Clare. When no one jumped at the chance, Clare took that personally and let the group know she wasn’t about it.

Yosef took this time to say “You’re crazy to think…..etc” I’m not going to lie I think he said something along the lines of you’re crazy to think we don’t want to spend time with you. I really stopped listening after the word crazy because duh.

Luckily for the rest of the evening we got to see Clare spend some quality time with some of the guys including but not limited to Dale. Riley really caught Clare’s eye and ended up with the date rose. Overall, this group date had some really awkward moments.

Next, we got to experience an extremely personal one-on-one date with Jason in which they wrote letters to their younger selves. Then they discussed all of the negative things people have called them and then debunked those things. They discussed not going to prom and burned Clare’s dress from Juan Pablo’s season and Jason received the rose. This date reminded me a lot of this line from the Rogers & Hammerstein modern-day retelling of Cinderella with Whitney Houston and Brandy. The step-sisters say this line before the ball “We hide our flaws until after the wedding.” Don’t get me wrong I think it’s great to get to know people on a deep and personal level that you are trying to date, but the first date might not be the time to open Pandora’s box on all of the negative things about yourself. Luckily, Clare wasn’t scared and gave Jason the rose.

Last on the list of dates was the Strip dodgeball date. All you need to know is that 10 guys played dodgeball and they stripped each round, eventually down to their teams colored jock straps. Clare gave the losing team a hug and sent them home sans clothing. The winning team was able to spend more quality time with Clare. During this time, we witnessed Clare sending Brandon home because he didn’t know much about her and really couldn’t put together a cognizant sentence about why he wanted to be here. It was awkward and Clare let him know she wanted to end their relationship. Blake Moynes, this seasons designated rule-breaker, decided to crash the party by coming back. The other men didn’t take that too well and confronted the couple. After rejecting him for a kiss she sent him home. Clare eventually got to spend some quality time with the winning team and gave Chasen the date rose. 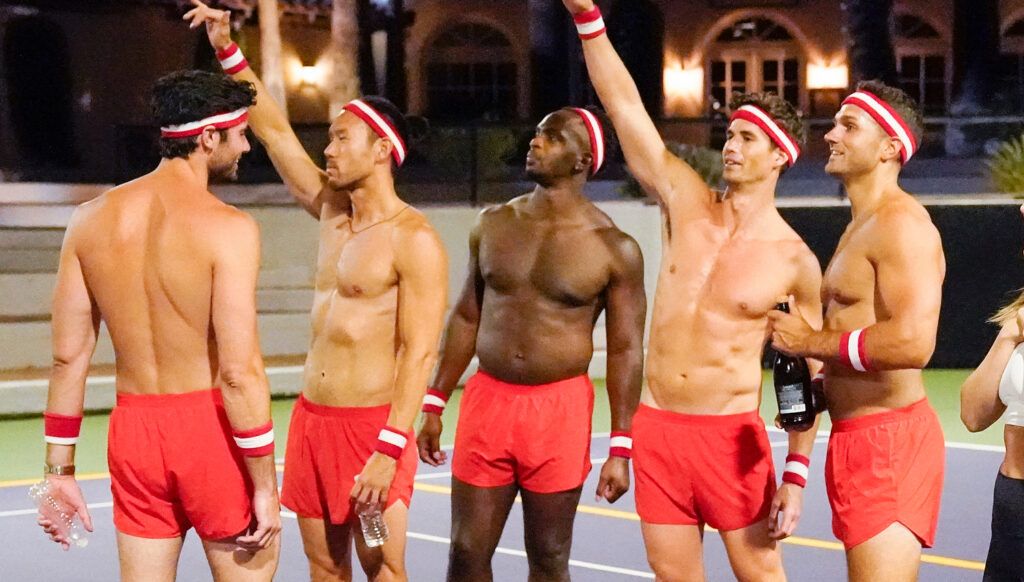 We got psyched up for the rose ceremony that didn’t take place. However, she pulled Blake Moynes aside and gave him a rose for his bravery…or something like that.

This recap is a lot of words to ultimately say this episode was one of the most awkward in existence.

We saw more promos hinting that Dale isn’t who we think he his and that Clare is going to “blow up the Bachelor.”

After this week, I can’t wait to see what happens next.